The Solemnity of Pentecost

The Solemnity of Pentecost 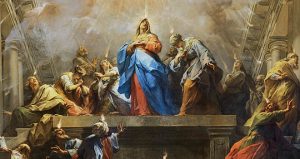 “When the time for Pentecost was fulfilled, they were all in one place together. And suddenly there came from the sky a noise like a strong driving wind, and it filled the entire house in which they were. Then there appeared to them tongues as of fire, which parted and came to rest on each one of them. And they were all filled with the Holy Spirit and began to speak in different tongues, as the Spirit enabled them to proclaim.

Now there were devout Jews from every nation under heaven staying in Jerusalem. At this sound, they gathered in a large crowd, but they were confused because each one heard them speaking in his own language. They were astounded, and in amazement they asked, ‘Are not all these people who are speaking Galileans? Then how does each of us hear them in his own native language? We are Parthians, Medes, and Elamites, inhabitants of Mesopotamia, Judea and Cappadocia, Pontus and Asia, Phrygia and Pamphylia, Egypt and the districts of Libya near Cyrene, as well as travelers from Rome, both Jews and converts to Judaism, Cretans and Arabs, yet we hear them speaking in our own tongues of the mighty acts of God.’   They were all astounded and bewildered, and said to one another, ‘What does this mean?’”  (New American Bible, Acts of the Apostles 2:1-12)

Pentecost was originally a feast of the Jewish faith that celebrated the giving of the Law at Mt. Sinai.  It occurred fifty days after Passover, hence the name Pentecost meaning fiftieth.

Pentecost is celebrated as a Christian feast because of the events that occurred fifty days after Jesus’ Resurrection: the descent of the Holy Spirit on those individuals that had gathered in the Cenacle, the Upper Room, and inaugurated the beginning of the Church. Pentecost is one of the three most important liturgical celebrations of the Church year.  It celebrates and commemorates the establishment of the Church which is why it is referred to it as the “Birthday of the Church”.

The Pentecost Event, as I call it in my text, My Intended to be but Never, Ever, Ever to be Published Tome, is an occasion that radically impacted and drastically changed the Apostolic Church.  Hiding behind locked doors and windows in fear of their lives, the descent of the Holy Spirit, the Paraclete, the Advocate, as promised by Jesus, transforms these individuals into people that boldly proclaimed the Gospel, the Good News of Jesus.

Prager, Edward.  My Intended to be but Never, Ever, Ever to be Published Tome.  n.p.