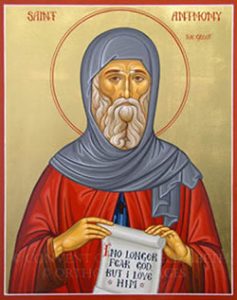 Anthony was a Coptic Christian (more about that at a later time), he was born in Egypt in the year 251 CE (AD) and he died in 356 CE (AD).  He is considered the Father of Monasticism in Christianity.

He was a rich young man; he had inherited his father’s fortune.  He heard the Gospel account of the rich young man in Matthew 19:16-22 and went and did this; he sold all that he had, gave the money to the poor and the Church, and went off into the desert to live a life of solitude, denial and mortification.  His initial desire was to live an eremitic existence, to live as a hermit spending the time in prayer but his sanctity and fame became widely known.  Many came out into the desert for his spiritual advice and guidance and some of these stayed.  Anthony organized those who stayed into a common life, being isolated for prayer and acts of penance and joining with the community for the Eucharist and communal prayer.

When Anthony died he was buried in a secret location but his body was soon moved to Alexandria.  His remains were translated (moved) to Constantinople as Egypt was invaded.  Much later his remains were given to a French count who placed them in Church of La Motte S. Didier, and then a Benedictine priory belonging to the Abbey of Mont-Majour near Arles.  In 1491 the relics were again translated, they were brought to Arles to the Church of St. Julian, where they are preserved in a glass casket. Today his skull and a leg bone are in the Church of St. Trophime in Arles.