Posted on January 3, 2018 by immacastoria 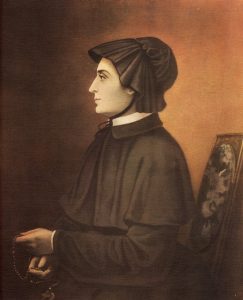 Elizabeth Ann Seton, also known as Mother Seton, was the first native-born citizen of the United States to be canonized by the Catholic Church.

Mother Seton was born Elizabeth Ann Bailey in New York City in 1774.  She was born into the Episcopalian Church.  She married William Magee Seton, a wealthy businessman.  They had five children together.  William developed tuberculosis and went to Italy seeking a cure which, unfortunately, didn’t happen.  William died in 1803.

In 1805 she converted to the Catholic faith which she had been exposed to during her time in Italy.  After family problems due to her conversion she moved to Emmitsburg, Maryland in 1809.  It was here that Mother Seton founded the Sisters of Charity, an order of religious sisters that live according to the Vincentian charism and are part of the world-wide Vincentian community.  She also is considered the founder of the Catholic school system since she started St. Joseph’s Academy in Emmitsburg, Maryland.

Here is a link to the Seton shrine in Emmitsburg, Maryland.  https://setonshrine.org/