Feast of Saints Peter and Paul

Feast of Saints Peter and Paul 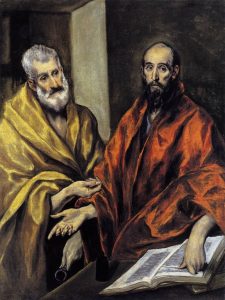 On June 29th the church celebrates the feast of Saints Peter and Paul.  Even though they were not martyred at the same time there is an ancient tradition of celebrating the joint martyrdom of these two saints.  St. Augustine preaching in the late 4th century explained the significance: “Both apostles share the same feast day, for these two were one; and even though they suffered on different days, they were as one.”

Peter and Paul were the two most important individuals in the early Church; both were recognized as the leading preachers, teachers and leaders, and they are acclaimed as the founders of Christianity in Rome. This association with the city lent significant prestige to Rome as the premier center of Christianity; only Rome can claim having had Peter and Paul live, preach and be martyred there, and this was one of the reasons that Rome and its bishop came to be recognized as the leading center and leading bishop in the Church.

Peter met his martyrdom in 64AD by being crucified upside-down.  He was buried on Vatican hill and St. Peter’s Basilica was built, eventually, over his tomb. Paul was martyred in 67AD by being decapitated. He is buried in Rome in the Basilica of St. Paul Outside the Walls.