Feast of the First Martyrs of the Church of Rome

Feast of the First Martyrs of the Church of Rome 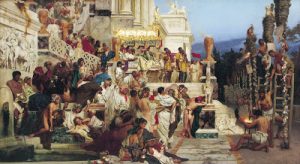 Today’s feast is a commemoration of those Christians living in Rome that suffered and were martyred in the first wave of persecution of the Church by the Roman state.  This wave of persecution was ordered by the Emperor Nero in response to the great fire of Rome in 64AD.  This fire destroyed over half the city.  Nero, looking for a scapegoat, chose the Christians, a small group that Roman citizens didn’t know much about. This began a 250 year period where Christianity would be subject to arrest, trial and death.