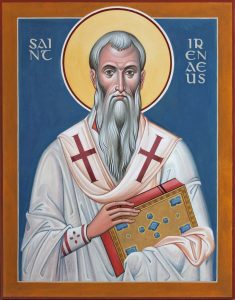 St. Irenaeus was s Christian bishop who lived during the 2nd century.  He was of Greek ancestry from Smyrna which was located on Asia Minor.  He knew Polycarp, bishop of Smyrna and a disciple of St. John the Evangelist.  As a young man Irenaeus heard Polycarp preach.

As an adult he moved to the city of Lyons in southern Gaul, now France.  He was a priest and he survived the persecution of the church by order of the Emperor Marcus Aurelius.  He was then named bishop of Lyons.

Irenaeus was famous for his orthodox preaching and teaching.  He preached concerning the right (orthodox) belief of the church in the face of certain heresies of his day.  His most renowned work is called Adversus haereses (Against Heresies).

Little is known of the later years of his life as bishop.  Some believe him to be a martyr. He is venerated as a saint by most Christian denominations.  His feast day is June 28th.