The Feast of St. Stephen

Today is the feast of St. Stephen, the Protomartyr, the first martyr.  St. Stephen is the patron saint of deacons. 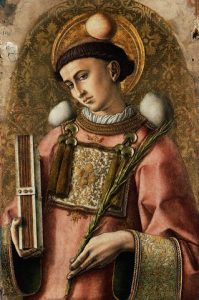 “Stephen, filled with grace and power,
was working great wonders and signs among the people.
Certain members of the so-called Synagogue of Freedmen,
Cyrenians, and Alexandrians,
and people from Cilicia and Asia,
came forward and debated with Stephen,
but they could not withstand the wisdom and the spirit with which he spoke.When they heard this, they were infuriated,
and they ground their teeth at him.
But he, filled with the Holy Spirit,
looked up intently to heaven
and saw the glory of God and Jesus standing at the right hand of God,
and he said,
“Behold, I see the heavens opened and the Son of Man
standing at the right hand of God.”
But they cried out in a loud voice, covered their ears,
and rushed upon him together.
They threw him out of the city, and began to stone him.
The witnesses laid down their cloaks
at the feet of a young man named Saul.
As they were stoning Stephen, he called out
“Lord Jesus, receive my spirit.'”
This entry was posted in Uncategorized. Bookmark the permalink.