The Season of Christmas, continued 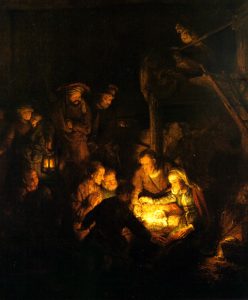 What does the term Christmas mean, where does it come from?

According to the Merriam Webster Dictionary our word Christmas derives from the Middle English word, Christemasse, which come down to us from the Old English words, Cristes mæsse, literally, Christ’s mass.  The first known use: before 12th century.

What does the Church celebrate on this day and during this season?

The season of Christmas, in addition to celebrating the birth of Jesus, is a fuller celebration of the Incarnation.  As the website of the United States Conference of Catholic Bishops states, “The word incarnation is from the Latin in carne means enfleshment”. (USCCB)

During the Christmas season, the Church celebrates and reflects upon, as the U.S Catholic Bishops state further: “the birth of Christ into our world and into our hearts, and reflect on the gift of salvation that is born with him…” (USCCB).

How long is the Christmas season?

The Christmas season begins on Dec.25th, technically at the vigil Mass on Christmas Eve, and ends on the Feast of the Baptism of the Lord, Jan. 8, 2018.

What is St. Mary Major?

Here’s a link to the Patriarchal Basilica of St. Mary Major: http://www.vatican.va/various/basiliche/sm_maggiore/index_en.html  The history of the present basilica dates to the 5th Century.  It also possesses relics of of the manger in which Jesus was placed.  It is under the altar.

Here’s a link to a virtual tour of the basilica: http://www.vatican.va/various/basiliche/sm_maggiore/vr_tour/index-en.html

What are some traditions and practices that Catholics can perform during the Christmas season?

Most of us put up and decorate a Christmas tree; many of us put a wreath on our front doors; some of us put (electric) candles on our windowsills.  What else can we do to commemorate the season or celebrate it appropriately?

Here are some activities that families and/or individuals can perform and use, perhaps, to create new traditions to pass on:

Jesus is the reason for the season!